In order to appreciate the spectacularity of ‘the third pole’, ambitious people come here from a great distance desiring to realize the dream of challenging the utmost limits of human being. And that is the charm of Everest. It is the pride of Shigatse that has become one of the most charming tourist attractions in Tibet.

Located in the alluvial plain at the confluence of Brahmaputra and Nianchuhe rivers, Shigatse is 273 kilometers west to Lhasa. At an elevation of 3,800 meters, with the area of 3,875 square kilometers and population of 820,000, it is the second biggest and the only county-level city in Tibet. Also, it is an ancient city in the altiplano with a history of nearly 600 years. It is named Xikasangzhuzi in Tibetan, and Xikazi for short, which stands for ‘a manor of the most fertile soil’, and it is transliterated into Chinese as ‘Shigatse’. In the middle of the 13th century AD, the Yuan Dynasty set up 130,000 Hus (households) in Tibet and the region where now Shigatse covers was under the jurisdiction of the Xialu master. In the early 14th century, Great Situ (Minister of Education in ancient China), Jiangqujianzan, built Pazhu Dynasty to replace Sajia Dynasty, removing the political center in the lower reaches of Nianchuhe from Xialu to Shigatse and setting up Xikasangzhuzi there. 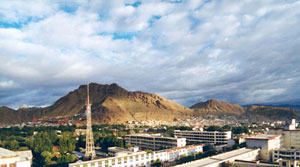 Zangzhuzi means ‘achieving what one wishes’ while xika was a common name for Tibet feudal manors (also suggested the primary administrative unit in the late period). Jiangqujianzan adopted Xikasangzhuzi as the name to show that he had already realized his aspiration. Xikasangzhuzi was habitually called Xikazi for short later, and then the name was shortened to various versions of Chinese translations and finally transliterated as Shigatse. According to legend, Lianhuasheng, a famous monk from Indian, went to Tibet to build Samye Monastery at the invitation of the Emperor Zisongdezan in the 8th century. He went by Shigatse where he preached and spread Buddhism. The monk had predicted the center of the snowfield would be set up in Lhasa and Nianmai (Shigatse) next. From then on, the devout believers set up zong (an administrative unit in Tibet) in Nima Mountain, which gradually became the center of behind Tibet. In the middle of the 15th century, Genshuzhuba, the first Dalai Lama and a disciple of Zhong Kaba, directed the building of Tashilumpo Monastery at the foothills of Nima Mountain, laying a solid foundation for the future development of the city. The ancient buildings there maintain the Tibetan style and absorb the Han architectural features as well, which is shown especially in the 16 monasteries of various features and denominations, such as Tashilumpo Monastery built in 1447, the Zong Ruins in the early 14th century, Xialu Monastery in the 11th century, Er Monastery in 1429 and Angong Monastery in 1548. Also, there are lots of Tibetan style dwelling houses all around urban and rural areas with distinct and various styles and connotations. Shigatse is a small city and big village as well, with the reputation of ‘granary’ of Tibet. It is also the seat for every generation of Panchen Erdeni. Nowadays, Shigatse has become an important tourist attraction and transit of Tibetan golden tourist route, attracting countless tourists at home and abroad with its mysterious Tibetan Buddhism culture.

On the southwest frontier of China and in the southwest of Qinghai-Tibet Plateau, Shigatse connects with Ali to the west, leans Nagqu to the north, adjoins Lhasa and Shannan to the east and borders on Nepal, Bhutan and Sikkim etc., sharing a part of frontier of 1,753 kilometers. It has an area of 3,875 square kilometers and average altitude above 3800 meters. There are one county-level city (Shigatse), seventeen counties (Gyantse, Bailang, Kangma, Yatung, Renbu, Nanmulin, Xietongmen, Lhatse, Sakya, Gangba, Tingjie, Tingri, Nyalam, Jilong, Angren, Saga and Zhongba), one port (Zhangmu, the biggest national commercial port in Tibet), 226 villages and 1,748 neighborhood committees. Its acreage under cultivation is 1250, 000mu(83333 hectares), the practical area of grassland 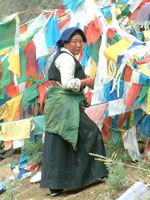 Features of the City

Shigatse is the most colorful area in Tibet with vast grasslands, fertile fields in river valleys, flourishing semitropical jungles and snowfields at high altitudes. The famous scenery spots include Xiqin Spring, Yatung Spring, Yongzelucuo Lake, Tashilumpo Monastery, Palkor Monastery in Gyantse, Sakya Monastery, Pingcuolin Monastery, Juenang Monastery, Pala Manor and etc. Furthermore, the Everest Nature Reserve, with an area of more than 30,000 square kilometers, is around it. The annual Zhanfo Festival and Tiaoshen Festival in Tashilumpo Monastery, Ximuqinbo Festival in Xialu Monastery and Tibetan drama shows have won a high prestige in the world for their distinct styles. In addition, Shigatse is rich in medicine resources, among which there are more than 300 kinds of medicines for common use, such as aweto, fritillaria, gastrodia tuber, hsueh-lien-hua, rhodiola root and rhubarb.