Buddha unfolding Festival, with a long history of over five hundred years, is celebrated in Tashilhunpo Monastery from the fourteenth to the sixteenth day of the fifth Tibetan month and it will be held on July, 15th 2011. Unbelievable giant Thangkas of Amitayus, Sakyamuni and Maitreya which cover over one thousands square kilometers are displayed on the monastery's Thangka Walls. Thousands of pilgrims rush to the monastery to give their offerings to the Buddhas for the accumulation of their merits. Buddha unfolding festival is a festival of Gtsang, and it is considered one of the 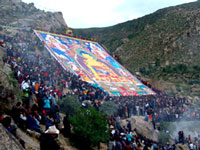 most important festivals in Shigatse districts. It is held in an extremely large scale, which have shocked people throughout the world. During the festival, Buddhist monks in Tashilhunpo monastery participate in lots of religious activities including chanting sutras, turning prayer, and praying for rain. So the Buddha Unfolding Festival in Tashilhunp monastery is also called a religious doctrines ceremony. In addition, some performances including the religious dance ceremony and the Tibetan operas will be put on to decorate the occasion.

Ongkor (Dharma) means horse race and archery in Tibetan. It began popular in Gyangtse area at the beginning, and now is current in many places especially the center of Gyangtse. Dharma Festival in Gyangtse used to be held on about 19th, April with the activities of horse race, horsemanship, wrestle and so on. But the more important activities should be the religious ones such as Buddha exhibition, performance of shaman’s trance dance and sacrificing etc. Now, Ongkor Festival is held in June when the people have fewer farm work to do.

Strolling about Linka has been a custom forTibetan people. This custom has a lot to do with the climate, the environment and the living condition of high land. People walk outdoors during the first day to the fifteenth of May in Tibetan months. They travel to Linka, a beautiful place abundant with trees and flowers, and thus, the festival is gradually formed. Linka festival of Shigatse is held in the first day of June in the solar calendar. In June, Shigatse is charming, attractive, with the sun shinning comfortably and the breeze blowing softly. The grass has 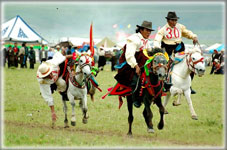 turned light green and the leaves grow vividly when the busiest time for farmers has basically passed. It is really the best season for people to enjoy the wonderful nature. Usually, Linka Festival is celebrated for a whole week when people put off their work to relax and play heartily.

Horse race was fixed as an activity of contest first in the year 1408 in Gyangtse. There are different versions of the origin of Gyangtse Horse Race Festival, which is also popular throughout Tibet. Dressing themselves and their best horse, thousands of herdsmen participate in the thrilling horse race, archery and horsemanship contest. Other religious activities, lots of games and the trading exchanges also become parts of the event recent years. The festival usually falls in June, which has become one of the grandest and largest-scale local festivals held annually in Tibet. It will be held on July, 20th 2011.

Back to Shigatse Travel Guide