Gtsang district has the longstanding fame of “Land of Singing and Dancing” where visitors can enjoy the bright and passionate folk dance. Folk dances there would catch people’s eyes with extremely attractive national features. Folk songs that have various styles have always shown people’s boundless intelligence. Love songs, pastoral songs, and ceremonial songs are composed and sung by men and women, young and old. They create sweet songs for entertainment in daily life and even while working. 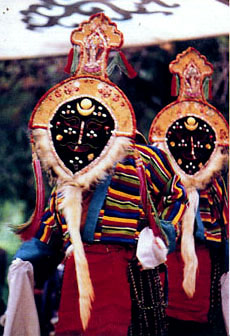 Getsang. Till now, these operas has impressed a large number of people and become popular all around the world.

Tibetan opera is certainly a precious treasure of Shigetse. Besides Tibetan opera, a great number of great works have also been composed and being another great treasure. “Hundred thousand songs” sung by Rilamiba (a famous Buddha) and “Sakya Maxim ” by Sa'gya Pandita had made profound and lasting influence in the history of Tibetan literature. “On Great Treasure of Buddhism History” by Master Bouton, "The Indian Buddhism History” by rje-btsun-tva-ra-nva-tha (a famous high rank monk of Tibetan Buddhism), and “Rural History of Tibetan Kings” by bsod-nams- rgyal-mtshan (a high rank Tibetan monk living in Yuan Dynasty) are all the representative great works in Tibetan historical literature. And there are also many famous works in biographical literature such as “Biography of Maer” by Tsangchi-rgyal-mtshan, “Biography of Rilamiba”, “ Biography of Rijiongba” and so on. Tibetans wildly read these great works as for vivifying lives and educating the descendents.

Back to Shigatse Travel Guide