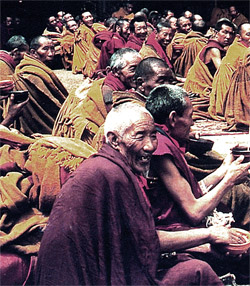 According to myth, the Tibetan people attribute their existence to the union of an ogress and a monkey. One day a monkey came into a cave in Yarlung River valley and began to cultivate himself to attain immortality. Later, an ogress came to him and tried to tempt him with tricks. She said to the monkey: “Will you marry me?” “No, I am a disciple of Mother Buddha. I am instructed to come here to cultivate myself. If I marry with you, it will violate the religious discipline,” replied the monkey. The ogress proceeded: “If you don’t marry me, I will have to commit suicide because I am destined in my previous incarnation to be degraded into a devil. Then you and I cannot become affectionate couple. Days later, I will become the wife of a devil and give birth to countless sons and grandsons. At that time, the plateau will be plunged into a world filled with devils and thousands of people will be killed. So please do as I told you.” Stuck in the dilemma and puzzled, the monkey had to return to Putuo Hill to seek instruction from Mother Buddha. She said: “This is destiny and this is an auspicious sign. It is a deed of great kindness to marry her and reproduce offspring for the plateau. As a Buddha, you should not hesitate to conduct kind deeds. Hurry back to marry the ogress.”

They got married and brought six baby monkeys into the world. They had different hobbies and different dispositions. They looked for food in the forest by themselves. Three years later, their father went to the forest and found out that the number of monkey had expanded to 500 by the way of reproduction. And they had eaten up the fruits in the forest and suffered from food shortage. Again the old monkey went to Mother Buddha for help. Mother Buddha took the seeds of five types of grains from Xumi Mountain and distributed them across the land. Crops sprung up in the vast land without being cultivated. Hence monkeys got sufficient food. After some time, their tails became shortened and they could speak language. Gradually they became humans, the ancestors of the Tibetan people.

The story that monkey became human was popular with the Tibetan people and was recorded in the ancient scriptures. You can also find the clues of the story in many wall paintings. Tsetang Town in Tibet was named after the story (Tsetang means in Tibetan language the play place for monkeys). The people in Tsetang will tell you that the cave where the monkey lived is still in the nearby Mt Gangpo Ri. The legendary first piece of farming land planting highland barley is in Sala Village, three kilometers away from the town. Up to today, every year when the sowing season comes, it is customary for people to take some “sacred soil” from the first farming field to pray for harvest and blessings from the ancestors.

Tibet’s first palace Yumbulagang is located in the Yarlung River Valley near Tsetang Town. It was built by the first Tibet King Nyentri Tsenpo. Tibet has a recorded history of about 1300 years. What happened before that had been passed down in the form of legends and these legends were written down by later generations.
In the 7th century AD, the 32nd Tibetan king Songtsen Gampo established the first kingdom in Tibetan history, the Tupo Regime, through conquest and alliances. The kingdom had the largest territory ever.
The Tupo Regime lasted 200 years to the year of 877. Slave and common people’s uprisings spread through various parts of the kingdom. And the insurrectionary army seized Qiongjie, dig up the tombs of Tibetan kings. Since then, the Tupo Regime fell apart. 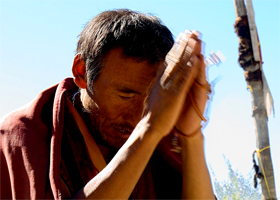 After the fall the Tupo Regime, Tibet had seen 400 years of division, local powers and wars. In the beginning of 13th century, Genghis Khan unified China and his grandson, Godan Khan unified Tibet by making use of the local religious power. When he learned that Sakya sect was the most powerful and summoned Gonggejianzan, the head of Sakya Monastery, to his court. They discussed and agreed on the conditions for Tibet’s submissions to Mongol Empire. So the head Sakya lama gained the authority over Tibet.

In 1260 Khubli Khan came into power as the emperor of Yuan Dynasty. He granted Basiba, the head lama of Sakya monastery, the position of spiritual leader and presented him a jade seal. The emperor also authorized him to take charge of national Buddhism affairs and administrative affairs of Tibet. In the year of 1265, Basiba was ordered to return to Tibet. He enlarged Sakya Monastery and set up Sakya kingdom to administer the local affairs in Tibet. Now Sakya Monastery is still there 60 kilometers away from Shigates City.

In 1322, a very eminent person in Tibetan history, Qiangqujianzan assumed office as the 10th head of the Wanhu (ten-thousand households). In 1348, Qiangqujianzan defeated Caiba. And in 1354 he occupied Sakya Monastery and replaced the Sakya authorities. Thus he instituted a government called Pazhu Regime controlling the most part of Tibet. Emperor Shun of Yuan Dynasty bestowed a title “Dasitu” on Qiangqujianzan and an official seal, authorized him to govern Tibet. At that time, the different sects of Buddhism had gradually lost its appeal to the public and the support from people due to the lack of the religious disciplines and monks’ corruption. Tsongkhapa then appeared on the historic stage who advocated the strict observation of the disciplines and religious reform. He gained great support from the Pazhu Government. In 1409, funded by the Pazhu Government, Tsongkhapa gathered 10,000 monks from the various part of Tibet and held a meeting on religious affairs. Later, he established Ganden Monastery near Lhasa. The establishment of Ganden Monastery marked the founding of the strictly disciplined Gelupa sect (also called Yellow Sect). There were 12 generations of kings in Pazhu Regime and they ruled Tibet for 264 years from 1354 to 1618.

Dalai Lama and Panchen were the two great disciples of Gelupa sect founded by Tsongkhapa. They bore the responsibilities of expanding the sect. The 5th Dalai is a dominant person in Tibet history. He lived in the years of both Ming and Qing Dynasty. In 1618 Pazhu Regime was overthrown and replace by the short-lived Gema Regime which lasted only 24 year. The Tibetan king Zangbahan hated Gelupa and adopted a policy to oppress and persecute it. In 1641, after discussion, the 5th Dalai and the 4th Panchen sent someone secretly to Qinghai asking Gushihan, a Gelupa follower, to lead troops to Tibet. The next year, Gushihan led large troops to Tibet and overturned Gema Regime. Supported by Gushihan, the 5th Dalai established the Gedanpozhang Regime. Consequently the Gelupa Sect was put in a dominant position in the Tibetan society. In 1652, the 5th Dalai escorted by 3000 people went to Beijing and Emperor Shunzhi of Qing Dynasty awarded him a golden seal and bestowed him as the spiritual and temporal leader of Tibet. And the title “Dalai Lama” and the position of Dalai were confirmed by the central government. Ever since, it has become a practice for the central government to approve and confirm a new Dalai Lama. 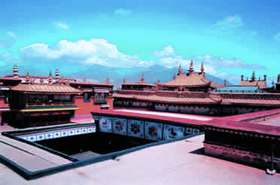 In 1895, 13th Dalai assumed the power to manage the political and religious affairs. In 1904, British army invaded Tibet and occupied Lhasa for 50 days. The 13th Dalai retreated to Qinghai. In 1908, he went to Beijing where Emperor Guangxu and Empress Cide had an audience with him and his title as Dalai Lama was officially approved.

After the Revolution of 1911, Republic of China was founded. In the 5-color national flag, the color of red, yellow, blue, white and black symbolized Han, Manchu, Mongol, Hui and Tibetan ethnic group respectively. In the following year, the government of Republic of China restored the title to Dalai Lama and he returned to Tibet.
The 13th Dalai Lama was the teacher of the 9th Panchen Lama. They shared equal political rights in Tibet. However, due to taxation problem, the two leaders had a conflict and confrontation, resulting in Panchen fleeing to Qinghai, where he died of disease in1937.

In 1949, People’s Republic of China was founded. The government stuck to the policy of peaceful liberation of Tibet. As a result, Tibet was liberated peacefully in 1951. The policy of regional national autonomy was exercised in Tibet. The democratic reform wad carried out and the feudal serfdom was abolished. In September 1965, Tibet Autonomous Region was established.