Pala is the short name of Pajuelakang family, which is one of the five Dipan families after Dali Lam. During the over 300 years ups and downs of Pala family, there were five persons assigned the local officials and played an important role in politics. Pala family owned mass manors and serf carried a strong old Tibet feature. The most precious is that it’s maintained in a good condition after the times vicissitude. Now it’s open to the public and serves as the evidence of Tibetan Serf system.

Pala Manor is located in Southeast of Gyangts, in the Banjorlhunbo Village of Jangra Town 4 kilometers southwest of Gyangze County.

How to get there:

From Jingshan Square in Gyangts, you can take 30 minutes’ motor tricycle to get there.

Pala Manor remains intact as a reminder of the vast contrast in the way in which the nobles and serfs lived in Tibet and as such provides evidence and datum for research into the politics, economy and culture of Tibet while still a society based upon privilege and slavery, which is also a good place for you to know the Tibet history.

Originally Pala, the former owner of the Manor, was a Bhutanese chief but due to civil strife in Bhutan, he moved to Tibet with his family where in due course he became a local official. He was once the high officer in the Tibet Gelun government with great wealth. The lord of Pala manor Wangjiu had been a lama in Linpu Monastery. He managed the daily affairs of the manor after the secularization. He consolidated the manor economy, extended the manor scale and strengthened the power to rule the serf. In the days 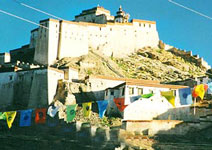 before the Democratic Reform, the manor had included twenty-two smallholdings, six lots of grassland and farmland covering some 8600 Mu (1414.45 acres). More than 14,250 cattle were grazed here and 2,440 serfs worked on the estate. Their tasks included general farm labor and animal husbandry as well as wine production. In addition many were engaged in knitting, sewing and the catering chores and other tasks necessary for the running of the estate. The peasantries had virtually no freedom, were treated harshly and suffered a very inadequate standard of living. Yet through their labor they helped provide their master with a grand lifestyle while they lived in dark and overcrowded conditions lacking amenities that could hardly be imagined in a modern society. At the time of the Tibet Democratic Reform in 1959 he left Tibet along with the Dali Lama to live in exile.

The Pala Manor we see today still has fifty-seven houses on an estate with an area of approximately 5000 square meters (1.24 acres). The main building is a three-storey structure including a scripture hall, reception hall, and bedrooms. Besides the lobby for playing the Chinese game of mah-jong there are many other reception halls. The maze of rooms is richly decorated with exquisitely carved beams and painted rafters.

Attractions of the Pala Manor
Back to Shigatse Tourist Sights