Shigatse Top Things to Do

Shigatse is the most colorful area in Tibet with vast grasslands, fertile fields in river valleys, flourishing semitropical jungles and snowfields at high altitudes.

Mt. Everest: Mt. Everest, also known as Mt.Qomolangma, meaning Goddess Third in Tibet, is the highest peak in the world. The 8,848 meters (29,028 feet) high peak, snow capped throughout the year. 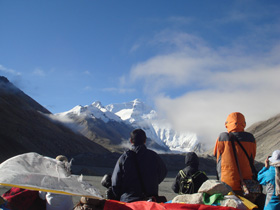 The North Col of Everest is located in Tinggri (Shegar). Massive glaciers and seracs feature a thrilling splendor. The peak has been a holy climbing attraction for world's mountaineers. In recent years, more and more mountaineers start from the Everest Base Camp trying to conquer the world's highest peak while tourists trek to the foot of the peak to enjoy its beauty. Around Mt.Everest, there are four peaks above 8,000 meters high, including Mt. Makarluh, Gosanthain, Zhuoyo, Shishabanma and other 14 peaks above 7,000 meters, which form an amazing picture of Mt.Everest Natural Scenery Area with jokuls, peaks groups, and mountain waves. Tips: Exploration of Mt.Everest is not suitable from October to April in the following year because of the chill weather; and it is monsoon in July and August, when it is impossible to see the Mt.Everest in the misty rain. So it’s the best time to enjoy Mt.Everest in April, May and June.

Rongbuk Monastery: A 78-kilometer (48-mile from the check point entering the Mt Qomonama mentioned before) trek leads to Rongbuk Monastery, which is the highest monastery on the earth. Its altitude is 5,100 meters (16728 feet). The monastery was built in 1899, as a Nyingmapa monastery since it was said that once Padmasambhava, founder of Nyingmapa, preceded his religious cultivation here. The monastery destroyed in the Cultural Revolution, having 8 sub-monasteries including a nunnery, is gradually restored. It houses Lamas and nuns in the same monastery. Sakyamuni and Padmasambhava are enshrined in the small temple. Pilgrims trek a long way to pay votive offerings or see lamas playing operas during big Buddhist days. 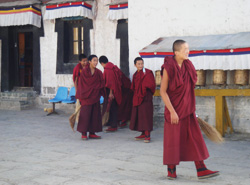 Experiencing five centuries, it still maintains the magnificent vigor. Tashilhunpo Monastery (meaning auspicious) is one of the Six Big Monasteries of Gelugpa (or Yellow Hat Sect) in China and the biggest Tibetan Gelugpa Buddhism monastery in back Tibet area. The monastery now has a building space of 300 thousand square meters (3,229,279 sq. ft.). The main structures found in the Tashilhunpo Monastery are The Maitreya Chapel, The Panchen Lama's Palace and The Kelsang Temple. Tashilhunpo is the seat of the Panchen Lama since the Fourth Panchen Lama took charge in the monastery, and there are now nearly 800 lamas. The main attractions in Tashilunpo Monastery: The Stupa-tomb of the Tenth Panchen Lama lies east of the chapel. The Kelsang Temple is one of the oldest and biggest buildings in Tashilhunpo. It is a colossal compound. The Main Chanting Hall is a place for lamas to learn the sutras and listen to the Panchen Lama's sermon. On the back end of the hall lies a 5 meters (16 ft) high statue of Sakyamuni. The biggest Jonba Buddha Bronze in the World, Standing at the entrance of Tashilhunpo, visitors can see the grand buildings with golden roofs and white walls. At Tashilhunpo Monastery visitors can see another amazing sight that lost of homeless dogs gathering here which are called freed captive dogs.
Tips: The Thangka Wall sits northeast of the monastery. The huge wall, 35 meters (115 feet) in height 40 meters (131 feet) in width, can be seen faraway. Founding in 1468, it was a memorial monument to commemorate the birth, nirvana and initiation into Buddhahood of Sakyamuni. On April fourteenth of Tibetan calendar every year, gigantic thangkas of Buddha will be displayed on the wall.

Palkhor Monastery: Lies about 230 kilometers (143 miles) south of Lhasa and 100 (62 miles) east of Shigatse at the foot of Dzong Hill, Palkhor Monastery is a kind of typical Tibetan Buddhism monastery architecture combined stupa and temple, 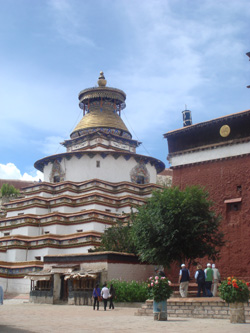 with temples in the stupa, stupas in the temple. The stupas and temples stay harmoniously and bring out the best in each other. Its architecture fully represents a typical style of monasteries from thirteenth century to fifteenth century in Later Tibetan area, which is also the unique monastery with both the temple and stupa being kept well today. It has two features: there are three classes of Buddhism (Sakys, Gedang and Gelugpa) existing harmoniously this monastery. Deemed as the symbol of the monastery, the spectacular "stupa" consists of hundreds of chapels in layers, housing about a hundred thousand images of various icons. In total there are about 3,000 statues, so it is called "Myriad Buddhas Stupa"So people often call it “Myriad Buddhas Stupa ", but not its formal name.

Sakya Monastery: The monastery lies in Sakya Country, 130 kilometers (80 miles) southwest of Shigatse. Sakya Monastery, reputed as as the "Second Dunhuang", is the first Sakyapa sect of Tibetan Buddhism created by its initiator Khon Konchog Gyalpo in 1073 from which Sakyapa rose and once ruled Tibet, occupied 14,700 square km. It was shaped in square, and the trove including “Beiye Sutra”, “Shouxing Picture” etc. Sakya Monastery not only records the history of the combination of religion and politics in Tibet, but also deemed as the sign that Tibet was brought into Chinese domain officially. Sakya Monastery has 900 years history and the Sakya Sect ruled Tibet for more than 70 years. So the monastery has a colossal collection of highly valuable art pieces, including abundance handwriting sutra that is said that copied by all the Tibetan calligraphists organized by Basiba. Sakya's collection of treasures also contains 3,000 pieces of sutras that have thousands of year’s history.

Shigatse boasts several local dishes. There are, for instance, Tibetan sausage, high-land barley wine and yak butter, beef and mutton, tongue of yak that served cold and dressed with sauce, tsampa, various kinds of cookies and sweat tea, milk tea, yoghurt, roasted sausage, dried meat, shapu (smashed meat) and so on. All these dishes can be found served in the night fair near the bus station, where the delicious Tibetan flavor would never disappoint you.

In Shigatse, visitors can buy most things that are sold somewhere else in Tibet. Jiaxijiecai, a beautiful small village surrounded by lots of green trees, had built up a good reputation for its Tibetan handicrafts, such as pottery pots, broadswords, water containers, bracelets and Buddha figures. Shigatse is also well known for its national handicraft industry. The most representative handicrafts in Getsang are: the practical gold-ware, silver-ware, bronze-ware and iron-ware used in people’s daily life, the classical and elegant “Songba” boots, silk cushion, ethnic costumes, Tibetan falchion in jade article and wooden bowl.