Lhokha Top Things to Do

Lhokha is the most prosperous part in Tibet and has the longest history in Tibet. Ranges, lakes, springs and river valleys constitute the featured landscapes. You can find scenes of different types, Snow Mountains and glaciers, farming land and grazing land, Holy Mountain and sacred lakes, historic relics and simple folkways. Lhokha Prefecture is known as the birthplace of the Tibetan people. The culture and natural sights of Lhokha are worth to visit.

Samye Monastery: Located at the foot of Mt. Hepo Ri, on the north bank of the Yarlung Tsangpo River of Zharang County, Samye Monastery is about 38 kilometers from Tsedang. Samye Monastery is one of the oldest Tibetan Monasteries. It was built a little later than Jokhang and the main monastery built during the first flourishing period of Tibetan Buddhism which is of great significance in the development of Tibetan culture. The monastery is modeled on the Odantapuri Temple in Bihar, India. After several dynasties’ extension, it now covers a large scale of more than 4,900 square meters. 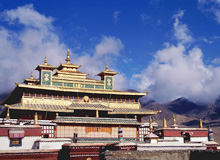 Before “Utse” the Great Hall which combines Chinese, Tibetan and Indian architectural styles, there is a stone “stele”, which was erected to honor Trisong Detsen’s vow of his piety to Buddhism. In the monastery there is a pair of white marble statues, their shapes are simple and with a carving style of Tang Dynasty. They are the most precious remaining stone sculptures in the monastery.

The Tomb of Tibetan Kings: Lie on the southeast of Mt Muri in Qungjie County, about 90 kilometers from Tsedang, The Tomb of Tibetan Kings are buried the kings, the ministers and the royal concubines from the 29th Tsanpo to the last (the 40th). It is also the largest tumuli group in Tibet. From all of the tombs, the most remarkable one is King Songtsan Gampo’s.
Situated on the Muchong Hill opposite to the Yarlung River, which shows that Tobu had focused on “fengshui” that centered on “with its back to the mountains and facing the waters”, the tombs erect on the plateau, with west wind blowing and sunset shining, and the Yarlung River flowing silently to the east, the tombs look grave. The Tombs of the Tibetan Kings have become the state key protected historical site.

Zhari Mountain: Zhari Mountain is located in the Zhari town, Longzi County, Lhokha Prefecture, which is known as the birthplace of Tibetan culture and Tibetan.As one of the twenty-four world famous mountains, Zhari Mountain is an ideal place for the construction of Buddha’s Shengle Warrior attendant palace. Zhari in Tibetan means a holy mountain or a luxuriant mountain. It’s said that this holy land was opened by an eminent monk zhonggong.zangbajiari (a Living Buddha) of Geju school (a branch of Buddhism) in some a Monkey year (by the Tibetan calendar) in the early thirteenth century. Before the opening, great masters Lianhuasheng, Baimalamizha, Adixia and Jiegongyixiduoji (the Living Buddha Dalagangbu) had been practicing Buddhism there. According to local legends, there are 108 kinds of trees, 108 kinds of rare medicinal herbs, 108 scared springs, 108 caves for cultivation, 108 sacred lakes as well as 108 places for celestial burial in the mountain. Therefore, the Zhari Mountain has been taken as an earthly paradise by travelers and Buddhist devotees.
The Zhari Mountain is generally referred as Shengle palace in Buddhism from where the Buddha Gods descended to earth. The holy name is not only household but also famous in India, Nepal, Bhutan and Sikkim.

Yamdrok Yumtso Lake:Lies within the boundary of Nankartse County, on the north bank of the Yarlung Tsangpo River, Yamdrok Yumtso Lake is a beautiful holy lake for local and tourists.
Yamdrok Yumtso takes a shape of paper fan and stretches roughly from northwest to southeast, while the south is wide and the north is narrow. Along the lake, there are many branches of the lake winding their way into the mountains. There is lush pasture around the lake with an area of 10 million square hectares and is one of the most famous pasturelands in Tibet. 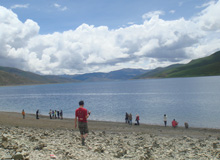 Yamdrok Yumtso has an elegant view and it is said that a fairy maiden left the Heaven and turned into the lake on earth.
Yamdrok Yumtso is a salt lake of low consistency and it begins to freeze every mid-November and the ice can be as thick as 0.5 meter. The lake abounds in small scale fishes, Tibetan fish,plateau carps etc, with an yearly production about 200 to 300 million kilograms. The fish breeding business has been flourishing and taken a large scale.
Here is also the largest habitat for water birds in north Tibet. Every winter flocks of birds are flying here from the south. Along the banks and on the islands there are large numbers of swans, pigeons, yellow ducks, cormorants and barhead goose. It will cost you 30 minutes to go down the pass to Yamdrok Yumtso, then you can enjoy the views on the road along the lake.

Different from the rest of Tibet, food in Lhokha is dominated by Sichuan cuisine. The Sichuan cuisine restaurants can be seen everywhere, with inexpensive dishes up to you taste. Tibetan food includes all kinds of sausages, Qingke (highland barley) wine, buttered tea, Yamdrok air-dried meat, cold yak tongue, steamed stuffed bun, roast sausage, air-dried meat, Xiapuqing ( a kind of minced meat), all sorts of cakes and sweet tea, milk tea, sour milk.
The recommend restaurant in is Jinhe Restaurant. Jinhe Restaurant can providing more than 300 Chinese dishes like Sichuan, canton cooking and more than 100 kinds of snacks full-timely. The restaurant places emphasis on the dishes, trying to bring out fully the features of Sichuan cooking as tasty, aromatic, beautiful and well designed to its customers. The typical delicacies of Jinhe Restaurant are Jinhe delicious chicken, tasty camel meat and Jinhe savory chicken.
Add: No.39, Naidong Road, Tsetang Town

Yomdrok Air-dried Meat
Air-dried meat, one of the staple foods for local herdsmen, is made of beef or mutton stripped and air-dried. Every household in the Yamdrok lake area has a special room for air-drying. The room has four walls around but one window on the top faor ventilation, and usually in use in October in Tibetan calendar (November or December in solar calendar)

Jiacha stone articles
Jiacha is abundant in graphite, which is soft in quality and easy to shape. Pots made of graphite will make the food more delicious and keep the heat well. In addition to graphite articles, Jiacha has products like wood bowl and wood bucket which are first-class not only in material, craft, painting and carving but also in durability.

Zhanang knotting
Zha means “workshop” in Tibetan, while Nang means “inside”, therefore Zhanang has the implication of “inside the workshop”. Those craftsmen worked in porcelain workshop, pottery workshop, metal ware workshop, textile workshop, knotting workshop, papermaking workshop, ink-making workshop, mill and winery. All the products from those workshops were made for upper class in Tubo period.