Nyingchi Top Things to Do

“Nyingchi” means “the Grand Seat of the Sun” in the language of Tibetan. Nyingchi is also called “the Switzerland of Tibet” and “the Jiangnan of Tibet” (Jiangnan means the fertile and prosperous area in the south of the Yangtze.)

What to see in Nyingzhi 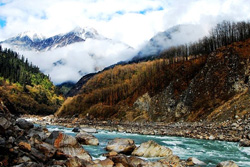 In the ancient Tibetan language “Yaluzhangbu” means the water flowing down from the summit. The Yaluzhangbu Grand Canyon, covered with ice and snow, embraces the mountains and peaks in the Najiaba Peak area. It constitutes a passage for the moisture from the Indian Ocean to the inner mountainous region which helps make the southeast of the Qinghai-Tibet Plateau a piece of green oasis. The canyon area encompasses the Pailong Village of the Nyingchi County, the Pai Village of the Milin County and the County of Motuo. The marvelous tourist attractions include the Grand Canyon, the Great Yaluzhangbu Turning, the Peak of the Nanjiabawa, the Peak of the Jialabailei, the tropical forest and the folk customs of the Menba and Luoba People. Covering different latitudes, the canyon is noted for its very unique topography and it is a paradise for a wide variety of creatures. People can get different views in four seasons.
Recommended routes to tour The Yaluzhangbu Grand Canyon
Route 1: Pai District Milin County- Duoxiangla - Nage - Hanmi - Maniweng - Beibeng
Route 2: Pai District Milin - Daduka - Gega - Jiala

Basongcuo: Basoingcuo, hiding in the deep valley of the upper reaches of the River Ba, 50 km from the the Gongbujiangda County Nyingchi, is a famous holy lake and land for the Red Sect (the Ninma Sect of the Tibetan Buddhism) at the latitude of over 3,700 meters.

It spreads like a huge crescent that goes 12 kilometers long and a few hundred meters wide. Basongcuo’s beauties inspire imagination of anyone who comes here. The flowers in spring, green trees in summer, golden fruits in autumn and white snow in winter all suggest that this is real “Jiangnan of Tibet” and a paradise for both the immortals and the human beings. Like a shy girl, Basongcuo never intentionally displays her beauty to others. She quietly lies in the embrace of the Snow Mountains and forest, just as the verse going.

Ranwu Lake: The Ranwu Lake, the largest in southeast of Tibet, is in the Village of Ran about 90 km from the Baiba Town neighboring the Nyingchi Prefecture. The lake, 3,800 meters above the sea level, has a water area of 22 square kilometers. The Ranwu Lake is surrounded by many scenic highlights, e.g. the Gangrigabu Snow Mountain in the southwest, the Azhagongla Glacier in the south and the Bosula Peak in the northeast. The melted snow and ice supply the lake with sufficient water and are also the source of many rivers such as Yaluzhangbu. The green grassland around the lake, the sky-blue lake water and the white snow mountains constitute a very pretty watercolor. The Amucuo Lake shrinks westwards and finally became a river valley. Its water takes on different colors in different seasons of a year and the water surface is dotted with isles or reefs.

Sacred Benri Mountain: It stands in the southeast of Nyingchi and the north of the Yaluzhangbu River. 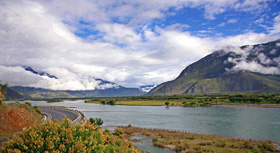 The 4, 500 meters high Benri Mountain, for instance, is one of the most important sacred mountains of Ben. From here one can see the Sejila Mountain and the Najiabama Peak from afar. It is said that when Master Lianhuazheng came to Tibet to challenge Ben, he competed his supernatural power here with the Ben leader Arqiongbo. On the northern hillside of the holy Benri Mountain there stands a stone tablet carved with the ancient Tibetan characters of the Tubo Period, which is of high historical value. Each year during the Shagadawa Festival the pilgrims will come to worship and circle around the holy mountain.
Tips:
1. A horse or yak will make the journey much easier and visitor can only climb from the east steep of the mountain.
2. It takes three to seven days to make a circle around the mountain on foot; on the ways lots of temples are open for visitors.

Apart from the traditional Tibetan food and beverage like the highland barley wine, pies and ghee tea, people in Nyingchi can also taste lots of local delicacies. As “the Jiangnan of Tibet” there grow a wide variety of fruits here: pear, peach, lemon, banana, watermelon, orange, pineapple and grapes among others.

The “Mt. Everest” green tea, “Giant Panda” woolen blanket and “Qizheng” pain killer bandage made in Nyingchi are good sellers in both home and world market. The local handicrafts are also known to the outside world such as the Menba wood bowel and bamboo ware, the Luoba stone pan and pottery. The Luoba stone pan is famous for its unique material and design.