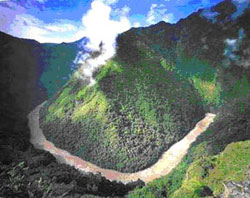 The Yaluzhangbu Grand Canyon is a world-class scenic spot in Tibet and it is of the same significance as the Potala Palace and Zhumulangma. Used to be a treacherous canyon hidden in inner Tibet, it has been “rediscovered” today as a new and challenging tourist destination in the east of the world.

In the ancient Tibetan language “Yaluzhangbu” means the water flowing down from the summit. The Yaluzhangbu Grand Canyon, covered with ice and snow, embraces the mountains and peaks in the Najiaba Peak area. It constitutes a passage for the moisture from the Indian Ocean to the inner mountainous region which helps make the southeast of the Qinghai-Tibet Plateau a piece of green oasis.

The Grand Canyon has a total length of 496 km, ranking the first in the world. The average much depth of the canyon is about 5, 000 meters and the deepest point down to 5, 382 meters, which is deeper than that of Kelka Canyon of Peru and Colorado Canyon of the US. The canyon area encompasses the Pailong Village of the Nyingchi County, the Pai Village of the Milin County and the County of Motuo. The marvelous tourist attractions include the Grand Canyon, the Great Yaluzhangbu Turning, the Peak of the Nanjiabawa, the Peak of the Jialabailei, the tropical forest and the folk customs of the Menba and Luoba People.

The canyon boasts the most abundant and complex mountainous ecological type in the world. From the bottom at some hundred meters above the sea level to the top of the Nanjiabawa Peak (7, 787 meters), there spread the distinct ecological systems ranging from tropical to systems only seen in Polar Regions. The rare species include “the living fossil” -the fern erne tree, the moss, the Yunnan iron cedar, the giant boa, the Bangladesh tiger, the long- leaf tail monkey and the bear monkey etc. In 1994 the scientist from the Chinese Academy of Science for the first time advanced that it is the largest canyon in the world, which has been evidenced later by the GPS measuring in October and November 1998. On the 10th of October that year the State Council of China officially entitled it “the Yaluzhangbu Grand Canyon”.

The sophisticated stone wares found in the canyon (similar to those unearthed in the northern steep of the Himalaya) suggests that 5,000 to 8,000 years ago here was not only a habitat for the Tibetan ancestors but also an important passage to connect people on the highland and those from the low areas. Nowadays there still live thousands of Luoba and Menba people in the harsh roof of the world. The preservation of their traditional customs and cultures, such as their tribe totems, witchcrafts and religious rituals, are highly appreciated as a piece of precious living archeological fossil.

The Yaluzhangbu Grand Canyon lies in the southeast of the Nyingchi Prefecture where the Himalaya, Tanggula and Henduan Mountains join together. Starting from the Milin County, it goes eastwards and turns southwards in the Jiabawa Peak and then it goes further southwards until Xilang of the Motuo County. Around 496.3 km long, the canyon has an average depth of 5,000 meters and a deepest point of 6,009 meters. The average depth of its core section is 2, 673 meters. The biggest height difference on the single side is 7,057 meters and the narrowest part only 35 meters. It is the No. 1 Grand Canyon in the world with the latitude of over 3,000 meters.

Back to Tourist Sigths in Nyingchi