Tibetans express themselves grammatically with the help of function words and different order of the words. Certain auxiliary words originating from verbs are playing an importan 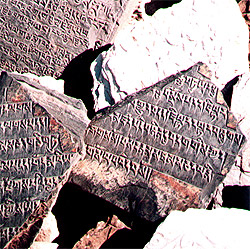 Tibetan verbs are composed of two parts: the root, which carries the meaning of the verb, and the ending, which indicates the tense. There are eight uses of the verbs in Tibetans expressing different tense and voice. Basically, there are the present, past, future tense, the perfect tense, the progressive tense and the subjective mood. For example, the simplest and most common verb form, consisting of the root plus certain ending, can be used for the present and future tense; in order to form the past tense, substitute the ending or add the auxiliary word.

There are two major functions of Tibetan adjectives: to modify a noun or to be predicative. When it is used in an indicative mood, it functions as an intransitive verb, which can only be followed by auxiliary word, not the object.

Tibetan numerals are of the decimal system. The cardinal numbers consist of only one syllable. Different words are used to indicate the high-order number like hundred, thousand, ten thousand, a hundred thousand, ten million, and so on. Tens digit can be used together with number of ones place with slight difference in the pronunciation.