The 2,413-kilometer-long Sichuan-Tibet Highway starts from Chengdu of Sichuan on the east and ends at Lhasa of Tibet on the west. The construction of the highway began in April 1950, and on December 25,1954, it was open. The road stretches into Lhasa passing Ya’an, Garze, Chamdo. Sichuan-Tibet highway 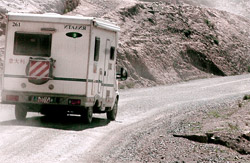 traverses 14 high mountains which average 4,000-5000 meters (Erlang Mtn,Zheduo Mtn and Hengduan Mtn), spans dozens of famous rivers (Daduhe River, Jinshajiang River, Lantsang River, Nujiang River), crosses primeval forest and numerous dangerous sections. It has fine views along the line, with unique customs. You can enjoy the magnificent and changeable scenery ranging from warm spring to cold and snowing winter, which makes you intoxicated. This climate will be changing in front of you, just like being in the paradise, and you may think “days in heaven, but years on the earth”. A car trip may cost you 8-10 days.

Scenic Spots along the route

The capital of Garze autonomous county with an old name-Dajianlu, as a noted town with famous scenic spot----Paoma Mtn、Muge Lake, it plays a role as the center of transportation, culture , commerce and politics in Garze county.

It divides Daduhe River and Yagongjiang River, and traditionally divides Man and Han group, with a name as “the barrier of the northern area of the Great Wall”.

It is the dividing spot of south and north highways. Being famous for the beautiful scenery, people call it as “the paradise of photography”.

Being located in the Maoya Plains, the vast and flat Litang is the highest county along the highway, called the “High town of the world”. The annual Litang Horse Racing, the most important civil activities in Kangding region, Tibet, is held in each August, a blooming season. At that time, all herdsmen with splendid costumes and exquisite ornaments from the grassland go together to the Horse Race.

The most famous Ra’og Lake is one of the origins of the branch of Yarlung Zangbo River. The Baxoi temple is one of 4 Gelug Sect temples.

Also named as Namjiagbarwa Grand Cannon. It is located in Tongmai Pailung County, a sharp turn of Yarlung Zangbo Grand Cannon, between Bome and Nyingchi. Known as Moinba village, Pailung is the departure spot for hiking adventure in the Grand Cannon.

Known as the Tibetan “Yangtze River delta”, and the capital is Bayi Town. Scenery mainly spreads on the banks of Nyang River, such as the biggest cypress of the world in Bagyi County, and Nyang River--tears of Saint Maid.

The most famous Basongcuo National Forest Park, also named as Gonggo Lake, is the earliest and most well developed scenic spot, and famous for the beautiful combination of lakes, mountains, plants and animal resources.

Huiyuan Temple is one of the temporary imperial palaces for the 7th Dalai Lama and the 11th Dalai Lama was also born in the place quite close it.

As the biggest temple of “Huo’er Yellow sect 13 temples”, Garze Temple is located on a hall in the north of Garze town.

Que’er Mtn peak is covered with thick snow all year around. The mountain pass, with an elevation of 6186 meters, is the highest peak of Sichuan-Tibet Highway. The scenery-marshy grassland, snow Mountains and lakes--is amazingly as pretty as Swiss, though the road condition is not so good.

As the cultural center of Tibet, Derge has many temples noted by academy. The origin of Tibetan woodcarving and engraving printing technology, Yinjing temple keeps the most delicate, complete and oldest printing procedures. Temple of Babang, Zongsa and Zuqing are also famous. Natural scenery includes New Luai, Axu Grassland.

Being located in the area of Hengduan Mtn and three-river (Jinshajiang River, Lantsang River and Nujiang River), Chamdo is an important town in eastern Tibet with many Monasteries, holy mountains and valley scenery, and the Chambaling Monastery is the most well known.

Known as the highest salty lake and one of three sacred lakes, Lhamo Namco in Damxung inlays in the northern Tibet grassland as flawless green jade does. At the end of Lhamo Namco, the beautiful picture combines continuous snow mountains, blue sky, green grassland, sheep, with the smoke from camps curling upwards. What a paradise far from the crowded and noisy city.