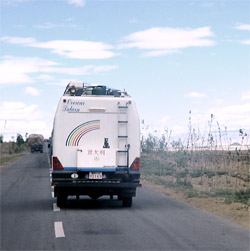 Being one of the highest highways in the world, Qinghai-Tibet highway starts from Xining, Qinghai Province. The highway crosses four mountains, namely Kunlun Mountain (4,700 meters), Fenghuo Mountain (4,800 meters), Tangula Mountain ( 5,150 meters at the mountain pass), and Nyainqentanglha Mountain. It spans three rivers, Tongtian River, Tuotuo River and Chuma’er River, averaging 4,500 meters. The Tibetan part of the highway is 544 km, and traverses the Changtang Plain in the north, and converges with the Sichuan-Tibet Highway in Lhasa.
The highway was first built in 1950 to support the Chinese People’s Liberation Army when they marched into Tibet peacefully, and was open on December 25, 1954.

Qinghai-Tibet Highway is 1,160-km (720 miles) long, and is the main state secondary road, with the roadbed being 10-meter wide, and an incline of less than 7%. The speed limit of drive is 60 km per hour.
If the tourists choose to enter Tibet by way of Qinghai, they can first take bus from Xining to Golmud, where they adapt themselves to the plateau climate and then starts for Tibet. Most of the vehicles start from Golmud for Tibet. There are several regular buses shuttling between Golmud and Lhasa. But if you want to look around the plateau, you’d better rent a vehicle for the travel.

Scenic spots along the route

Golmud is a new industrial city located in central Qinghai province. Long-distance buses ply from Golmud to Tibet and Gansu province, another northwestern province in China. When the Xinjiang-Tibet highway, Yunnan-Tibet highway and Sichuan-Tibet highway are blocked because of the cold winter or road collapse, buses will switch to Golmud, so it is called the key junction of the Tibetan overland transportation to the outside world. There are not many tourists’ interests in Golmud, but it is a transfer station for the tourists to go into and out of the city of Lhasa.

After leaving Golmud, it is a 110-km drive to reach the Kunlun Mountain pass. If you start in the afternoon from Golmud, it is normal to stop at the Kunlun mountain pass, which is at an altitude of 4,200 meters, to have the dinner. Oxygen here is thinner. The headache and dizziness caused by altitude reaction usually begins from this place. For people who come to Tibet for the first time, it will be the most difficult thing to have this supper. It will be Wudaoliang after crossing Chuma’er River. Weather is quite changeable in the mountainous area, so it may snow suddenly even in July or August.

Being the headwater of Yangtze River, Tuotuo River rises from the 6,621-meter-high Geladong Mountain, the highest peak in the Tangula Mountain range. The River converges Chuma’er River, forming the river called Tongtianhe River. After the river flows into Sichuan and Yunnan province, it is called the Jinshajiang River, then it is called the Yangtze River.

After leaving the Tuotuo River, driving south for 203 km, it is the whole Tangula pass, the highest point of Qinghai-Tibet Highway, also where Qinghai province bounds Tibet. The earth is the frozen here, with the temperature under zero for long period in a year. Because the moisture in the land is frozen the whole year, the road surface is quite frequently damaged. Weather in the pass area is not stable. Even in summer, the highway is often blocked by heavy snow, and hailstones and hoarfrosts are quite normal. The oxygen here is only the 60% dense as that in the horizontal area, so commonly the tourists will suffer from altitude reaction when crossing the mountain pass. The bus will stop for a while at the place, don’t miss the chance to take a photograph before the stone monument, on which are sculpted “Tangula Mountain pass, 5,231 meters above the sea level”

It is said the landscape alongside the road is part of Tibet attractions. The rail travel from Golud to Tibet is no doubt a good choice to view the natural scenery with up to 9 platforms specially designed for tourists between this section. Book a train tour to Tibet from Golmud to Lhasa .

After the coach crosses over the Tangula Mountain pass, the elevation lowers down gradually, which relieves the altitude reaction. Nagqu gradually comes into sight as one gazes forward. Reaching Nagqu means that it is only several hours’ ride to get to Lhasa. Nagqu, which means the “black river” in Tibetan language, lies in the north part of Tibet, between Mountain Tangula and Mountain Nyainqentanglha, with an altitude of 4,600 meters. Nagqu is located in plateau and highland, so it is dry and cold, with frosts, gales and hailstones through the whole year. The most favorable travel time there is the time between August and September, with the annual horse racing festival being held, spectators and businessmen and other people coming in a continuous stream.

Leaving Nagqu, it is a 164-km travel to get to Damxung, which also lies in central Tibet and belongs to the Kangdese Mountain-Nyainqentanglha Mountain belt. The tourist attractions are Lhamo Namco Sacred Lake, which is 48 km from Damxung, Yangbajain Geothermal hot springs, which are 80 km southward from Lhamo Namco. Lhasa, the terminal of the Qinghai-Tibet highway is 87 km from Yangbajain.

How to get there

Long-distance coaches, which depart from the Long distance Bus Station, ply in Damxung, Lhasa, Sog county, Golmud, etc. Because of the developed transportation network, there are more vehicles in this part of the highway than in other highways stretching into Tibet, and the traffic is not limited by the climate of different seasons. It is likely to get a hitchhiking if you wait at dusk at the parking lots of the bus station inn or just at the roadside.

May to September is the best time for tourists. It is the typical climate of plateau lands along the Qinghai-Tibet highway. The rapes bloom vigorously in from July to August, making the place a “Tibetan Yangtze Delta in spring”. Rainfall may ruin the travel a little.

The altitude is high in Wodaoliang and Tangula pass and it is chilly there and snows often. Enough winter clothing should be prepared. Medicines against altitude reaction, such as Rhodiola rosea, should also be taken with you. If you are not definitely confident about your physical condition, to take some bottled oxygen along is advisable. “Huoli Oxygen”, a kind of bottled oxygen, can be bought in Xining or Golmud. Price: RMB 20 yuan. Avoid any strenuous exercises when the bus passes through the Tangula pass and lets off all the passengers for them to have a rest. Some tourists who come to the Plateau for the first time may not feel any altitude reaction because they are too excited. If they skip and jump at the pass, they will suffer from shock because their hearts are over-loaded suddenly. Because the journey is mostly spent on the vehicle, enough solid food and drinking water should be prepared.