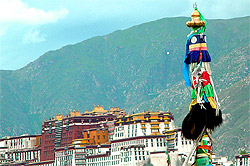 Names are important to Moinba people. According to the Tibetan Buddhist tradition, people choose names with an auspicious meaning for children. In Tibet there are two main ways of giving children names. One way is that parents give a name to the child. The other is to invite the great lama to name the child. The second way is quite common in Tibet nowadays.

Many people nowadays request His Holiness of the 14th Dalai Lama to give names to their children. Some people even request a name for the child before he is born. When people go to the Dalai Lama, they will be given a name written on a thread of blessed cloth. Sometimes they will also be given some blessed pills of Tibetan medicine. Tibetan people believe that these blessed things are a combination of religious power and mercies from the lama. What’s more, they believe that these things can bless the child with an auspicious beginning in life and protect him from physical and mental harms.

Three days after the baby is born, the parents will ask the lama to name it. The lama sometimes name the child according to the day on which it is born. People believe that the custom can place the child under the protection of that day's deity. e.g. Nyima is a name for a child born on Sunday (By taking the name, he gains the protective power of Sun, the ruler of Sunday). Every time his name is spoken, that protective power is re-affirmed. The names for children born on the following days are: Da-wa---Monday, the Moon; Mingmar--Tuesday, planet Mars (Tibetan pronunciation can be “Mikmar”); Lhak-pa--Wednesday, planet Mercury; Phu-/ Phur-ba--Thursday, planet Jupiter; Pa-sang--Friday, planet Venus; Pem-ba--Saturday, planet Saturn.

Moinba people also have names related to male or female Buddhas or enlightened beings. Some names such as “Tenzin” or “Dawa” can be both male or female although females are often named after a female Buddha or deity such as “Dolma” (Tara in Sanskrit), which means the “one who liberates others from suffering. There are also female names such as “ Dicky Dolma” which means “one who is healthy, happy and liberates other by leading them to Nirvana.” Some Moinba names have important religious symbols. For example, “dorje” symbolizes indestructibility, compassion, and skillful means. People are also named after simple Buddhist terms such as ” sherap”, a word meaning wisdom, or “ sopa”, meaning patience.

If some children die young in a family, the parents would rather give some embarrassing names with bad meanings for the new babies in the wishes of surviving them and making their life easier and happier (according to the Chinese tradition, these embarrassing names, often connected with animals, can help bring up the children and prevent the them from harms). Some examples are Gyigyai(dog’s dung), Paygyag(pig’s dung) and Shileg(one who has returned to life after death).

After the naming ritual, the grandmother will bring the baby out of the house. With a lit firewood, a gourd of water, a piece of farming tool and a handful of earth, they will follow the lama and circle the house three times. After that, they throw away four things, which symbolize the flesh borrowed from the earth, blood from water, breath from fire, bone from iron and stone, and heart from the sky. The families will express their gratitude to gods for giving them so good a child, and say they will bring him up to be an outstanding hunter or a clever girl. After discarding the four things, a man holding a peacock made of corn flour will go out of the house, walk after the baby and nod his head frequently to him. Moinba people believe that the auspicious peacock has the miraculous power of reducing poison and help digesting, thus can help keep the baby safe in his life.

The maternal uncle raising hell on the wedding

As the famous Galug love song goes: “ The sun would never be blotted out even the mountains in the northeast are high; Young people would not be discouraged from finding a partner even their parents strongly object”. Young people of Moinba ethnic group feel free to love and to be loved, and their parents usually do not prevent them from finding their love. Generally, if two young people fall in love with each other, either the girl’s or the young man’s parents will send for a matchmaker to arrange for the marriage. The betrothal gifts from the bridegroom to the bride’s family are considered necessary in the wedding.

The maternal uncle of the bride is the most honorific figure at the wedding. This is a reflection of ancient matriarchal practice in the culture. In this ancient family system, a family was controlled by the mother rather than by the father. The oldest brother in a family was the guardian of his sisters and her family. Although these matriarchal practices seem obsolete nowadays, the role of the oldest brother of the mother, i.e. the bride’s uncle, remains same. There's still a popular phrase: “In heaven there is the god of thunder; on earth there is the maternal uncle”. Because of this tradition, the uncle is the most respected guest at the wedding. Everyone on the groom side makes great effort to please him.

As soon as the maternal uncle arrives, representative on the groom side should present the Hada with sincere respect. Then the uncle will be seated at the wedding feast. A lot of courses will be served to him. Dishes made from the heads, tails, ears, hearts, lungs and livers of buffalo, pig and sheep are indispensable. The uncle, who seems very difficult to please, will say something fastidious on purpose to create difficulties for everyone on the groom’s side: why is the meat so cold? Why is the wine so hot? Why are you so indifferent to me? Why don’t you serve enough food on the table first? Is my attitude not polite enough? Is my dear niece not as good as you expect? The uncle tries his best to act “angrily”, showing he is the spokesman of the bride and the most honorable guest in the wedding.

Certainly, the groom and people on his side will try their best to please the maternal uncle. For instance, they present hada to show their respect, money to show their wealth, and presents to show their friendship. In addition, they will try hard to say as many polite and pleasant words as possible to praise the bride as well as the maternal uncle. The uncle, feeling content to his hearts, will allow the groom to marry his niece in the end. Actually, we can imagine that no uncles today stand in the way of their nieces' marriages. The uncle, putting on a peremptory yet humorous show, actually adds even more fun to the wedding ceremony. Maybe that’s why “uncle on the mother's side raising hell on the wedding” is still in existence as part of their folkway.

The Moinba people have three meals a day. Their staple food includes rice, maize, millet and buckwheat. Like other Tibetans, the Moinbas also eat Tsampa (roasted qingke barley), butter tea and pepper. The main food scattered in Medog, Nyingchi and Conag counties is a kind of food made of chicken claw millet. People of Moinba like to bake buckwheat cakes on a thin stone board with buckwheat flour. They eat rice in the same way as the Han people do while maize and millet are ground and prepared to make porridge.

Mainly having yak meat and scalper meat on table, they also enjoy pork mutton and meat of wild animals which are hunted. They usually eat dried meat and broth. Some areas in Tibet has built up a long history of planting vegetable, and various kinds of vegetable has been planted, such as tomatoes, peppers, cabbages, cucumbers, pumpkins, leeks and so on. People of the Moinba minority are very good at vintage with grain like the chicken craw millet, mealie, broomcorn and so on. Most of their cooking utensils are made of stones because they think food prepared in them is tastier. Almost all the tableware is made of wood. The wooden bowl made by Moinba people, has become a famous traditional handicraft.