The 2,965 people of the Lhoba ethnic minority have their homes mainly in Mainling, Medog, Lhunze and Nangxian counties in southeastern Tibet. Lhoba is what Tibetans call the people living in Lhoyu. It means "southerners" and includes many different tribes such as Bogaer, Ningbo, Adi, Tajin. The Lhobas’ main occupation is farming, but hunting and gathering provide a considerable portion of their livelihood. They traditionally believe in primitive religion and Tibetan Buddhism. 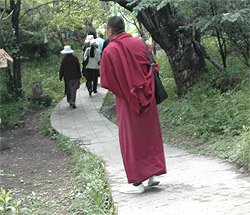 The Lhoba ethnic group believe in old and original religion, they believe that everything in the world is animate, that is, everything has it’s own spirit, and the spirits are immortal. The spirits are called “Wuyong” by the Lhobas, they are considered to be everywhere in the world. All living things in the world are subject to the domination of “Wuyong”. If someone happens to offend “Wuyong”, misfortunes and disasters would come to him in no time. “Wuyong” has much influence on people’s way of thinking, people’s work and life, thus Lhobas respect and worship it deeply. The numerous taboos are the main activities for Lhobas’ religious worship. People’s daily lives are restricted by their taboos.

(1) Every village of Lhoba nationality has its holly stones, which people are not supposed to touch, to move or to sit on. The villages also have holly trees, which people are forbidden to cut. When it comes to the annual ceremony, all villagers walk around the holly trees and stones for three circles, kill hens and serve food and wine as the sacrifice to the Gods. Most Lhobas worship stones of strange shapes and special and unique trees because they consider them as the habitat of the god of stone and the god of tree. Lhobas sacrifice wild chook to the Gods for three times every year, mainly on the New Year’s Day, the time for spring semination and the time for autumn harvest. The villagers of Lhoba are in awe of these stones and trees very much.

(2) While emasculating the pigs, the housemaster will insert some green branches in front of the door, which means no strangers are allowed to step into the house. And the family will not lend anything to others. What’s more, they are not permitted to go by the oven with things like wool or leather. It is a taboo for the emasculator to say anything related to “death” or “be no more”. Approaching to ovens, the hearths, and the firewood is also forbidden.

(3) Strangers are not allowed to go to a Lhoba’s house within the first three days after a woman gives birth to a child or when somebody is ill, even when pigs , dogs or cattle are giving birth to the young. If the Lhoba’s relatives or friends happen to call on at that time, they should yield the committed words “ Never let ghosts and devils in!” for three times before going into the house with the guide of the housemaster. If not permitted by the housemaster, guests would be regarded as the ghosts and monsters, and certainly driven out in the short time. If the guests do not understand the taboo of Lhoba nationality and refuse to go out, there would raise a quarrel or even a hot fight.

(4) Hunting dogs have played a significant part in Lhoba group’s life of hunting. The Lhobas take dogs as their own sons. Tens of dogs are raised in each Lhoba family, they don’t bite people nor bark. They are kind to people while ferocious to wild animals. Guests are forbidden to beat or to scold the dogs. Otherwise, they would be driven out.

(5) While mending the house, the housemaster would pray in loud voice, “ Health for both the family and livestock; health for the generations; good harvest all the time!” Then he would spread the mixed grain up to the sky carefully, respectfully and seriously. Nobody can sneer at him at this time.

(6) Pigs are considered as the leader of livestock, they are the main livestock for the frequent sacrifices. Therefore, pigs are taken good care for, and their food troughs are protected and people are forbidden to relief themselves there.

(7) Lhoba people never lock the door. Stealing and lying are considered the most insufferable and inexcusable thing. If people happen to catch a thief or a liar, they would certainly educate or even drive them out of the village. Those recidivists would be killed as the punishment.