In Tibet, the funeral services inherit the traditional custom including Stupa Burial, Cremation, Celestial Burial, water burial, earth burial. The funeral services must follow the rigid hierarchy of ranks, sharp demarcation. Which service should be taken also mainly depends on the divination from Lama. 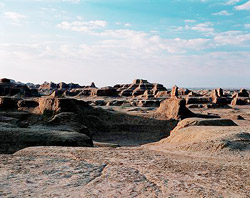 Cremation service is comparatively noble and traditional in Tibet. The service is to pour butter onto the wood and straw to burn the body into ashes, then the ashes will be put in a wood box or an earthen jar, and buried in the earth at home or on the top of a hill or in a piece of pure land. The tomb is like a tower. Another way is to take the ashes to the top of a tall mountain scattering with the wind or into the river. But the sainted Living Buddha or Lama’s ashes usually is put into a small gold or silver tower some together with classical books, joss, musical instrument (used in Buddhist or Taoist mass), and treasures. The tower for worship is usually called mourning tower or mourning bone tower.

Celestial Burial, which is also known as “Bird Burial” is the ordinary burial service in Tibet, and the ceremony normally held by the farmers, herders and ordinary people. Buddhists believe that Celestial Burial represents their wishes to go to heaven. There are celestial burial places and professional celestial burial masters in every district.
When a person dies, he or she is bent into a sitting position, with the head against the knees. The body is wrapped in white Tibetan cloth and laid on an earthen platform on the right behind the door. Lamas read the scripture aloud to release the soul from purgatory. The family will choose a lucky day and ask the body carrier to carry the body away to the celestial burial platform. "Su” smoke is burned to attract condors, Lamas chant sutras to redeem the sins of the soul, and a professional celestial burial master deals with the body. Then the condors come, and attempt to eat the body.

If the body is eaten, it shows the dead person has no sin and that the soul has gone peacefully to Paradise. If not, the remains of the body will be collected and burnt and the Lamas chant sutras to redeem the sins of the dead. The Tibetans believe that the condors on the mountains around the celestial burial platform are “holy birds” and only eat the human body without attacking any small animals nearby.
The service often takes place in the morning. The body should be sent to the destination before dawn and the service begins while the sun is rising. Visitors should not go to watch the service without permission.

Burial in the ground

To the Tibetans, earth burial (burial in the ground) is the inferior form. Only those who suffer from infectious diseases (including leprosy, smallpox, anthrax ,) or those killed by robbers or murderers will be buried in this way. Earth burial indicates two meanings :One is to eradicate the spread of murrain. The other is to act as a way of penalizing the dead by putting it into the hell.

The Tibetan government and travel agencies do not encourage tourists to watch celestial burial services. Neither do the Tibetan people, especially the relatives of the dead. Please, show respect to both local customs and normal people’s feelings.