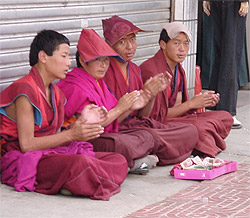 nunciation of Tibetan, meaning “superior master” or “superior man”. The ordinary monks were called “Drakpa” in Tibetan, while “Lama” was only for the temple abbots or adept monks. Later “Drakpa” are also called “lama”.

They are the transmittors of religious theory and the hosts of religious rituals. People respect Lamas as they believe that Lamas are the only supervisors who can lead them to Buddhism.They turn to the Lamas for advice and help whenever they are in difficulties. Lamas are considered to be the spokesmen of the deity. In people’s eyes, Lamas are able to act as intermediaries and interpret the will of the deity, and also pay respect to imaginary deity for them. Every family is willing to send their children to the monasteries an If an ordinary person wishes to become a lama, he will has to go to the monasteries to learn sutras. A novice b d becoming a Lama is one of possibility for a Tibetan.

There are many kinds of Lamas in Tibet.etween the ages of seven and twenty is known as Drakpa when he has finished ten “Shami” commandments. After learning 250 Bhisu commandments at the age of 20, he will become a Lama. If a Lama is Juqiawa, he has to study all kinds of Buddhist classics in order to graduate with a Geshi degree. It takes about twenty years to finish a Geshi degree, and only a few can complete a Geshi degree while most Lamas cannot. After studying for various periods, some Lamas will continue to learn Buddhist doctrines in temples in the mountains. Others will become sculptors, doctors, etc. Some will become Aba (necromancer), making a living with magic words because they have not learned Buddhist classics systematically. Some will go to farms to patter and pray for the farmers, although they still live in monasteries. Some of the Lamas will stay in monasteries and work as laborers. Monasteries were important places of education for children, as there were not enough formal schools inTibet. Lamas are respected teachers.

The Lamas who have learned Buddhist novice commandments and Bhisu Commandments learn to chant and pray, which takes much of their time.Generally speaking, they do not undertake a great deal of manual labour. Lamas have similar dresses with minor differences, but the colors are different (red, yellow, golden, purple, Chinese date red, etc.). However, the diverse colors of the dresses do not mean different religious shools.