The Shoton Festival in Lhasa

It’s one of the Tibetan traditional festivals. In Tibetan, “sho” means “Yoghurt” and “ton” means “banquet”. So Shoton Festival is also called the 'Yoghurt Festival'. Subsequently, as the activities of Shoton Festival gradually changed into an activity with Tibetan opera as a major part, so people also called it the Tibet Opera Festival. Prior to the 17th century, Shoton had been an exclusively religious observance. The month of June on the Tibetan calendar was reserved for sel 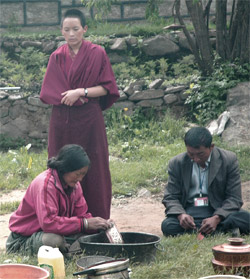 f-cultivation and meditation for all the monks who were not allowed to go out of monasteries until July 1, when local residents would offer alms of yogurt (Sho, in Tibetan), that’s how The Shoton Festival came into being. From around the mid-17th century, Tibetan local operas were added to festival celebrations. In the beginning of the 18th century, Norbu Lingka was built and acted as the summer palace of Dalai. Then the main site of the festival was moved to Norbu Lingka and celebrations became formalized. Accordingly, the fixed Shoton Festival was established. In the old Tibet, the activities of the Shoton Festival went like this: on the 29th of the sixth month, troupes all through Tibet would go to the Potala Palace and registered in the local government. Curt performances was given at the ceremony and then they would worship Dalai at Norbu Lingka, and returned to Dreprung Monastery in the evening. On the 30th , Zang opera would be performed all day at Dreprung Monastery.

On the 1st of July, all the troupes would give performances together at Norbu Lingka. From 2nd to 5th of July, troupes from Gyantse , An’ rang、Nanmulin and Lhasa performed one day in turn. During the festival, the Gesa government took a holiday. All the officials woull assemble at Norbu Lingka and enjoyed the performances with Dalai. At noon, a banquet was given to treat all the officials, and Yoghurt was served. The residents in Lhasa and peasants from suburb would dress up ,take along food and drinks and go to Norbu Lingks for the performances .