Horse race and arrow shooting are popular sports on the vast expanse of grassland in Tibet, which has a history of more than 500 years in the regular festival ceremony, starting from Gyantse in back Tibetan area. During the year of 1408, In memory of the local King Rapten Kunsang, the festival falls on the 10th -27th of fourth month in Tibetan calendar again and a rule is made tha 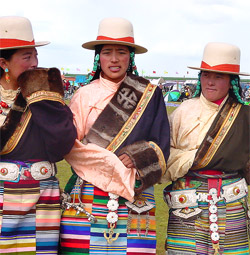 t all recreations will start from 28 . From 1147, shooting on gallop was added to the original schedule of events, that’s the nowadays Gyantse shooting on gallop Festival. From the middle of the 17th century, the religious activities have turned to a symbolic part. Large -scale horse race and archery comepitions are the most important part in the festival, lasting 3 days. From the 15th century, horse race and archery activities were gradually introduced to Lhasa, Qiangtang、Kongpu and other areas. The Lhasa horse race and archery activities, reaching its peak during the period of Dalai V, starts after the Great Prayer Festival and lasts 4 days.The Horse racing festivals held in Nagqu are the grandest of the racing festivals and events throughout Tibet each year, held in late July and early August in Zang Lunar. Among them the most famous is the “Dangmujiryang” in Damxung Plain, lasting five to seven days,similar to that of Gyangze, During which ,simple religious ceremony will be held and then the horses will be examined and identified , followed by horse race and arrow shooting competition. Many people will take part in it and commercial activated are in addition to all the above.