This is the greatest religious festival in Tibet. Originated from Tsongkpa in 1409, the founder of the Gelukpa sect. Monks from the Three Great Monastery of Tibet assemble in Jokhang for prayer to Shakyamuni’s ima 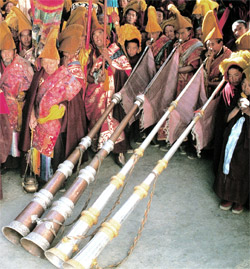 ge as if it were the living Buddha.According to the legend, in the first month of the year, Buddha conquered or converted six holy men of false religions at the joint place between Tibet and India.In the beginning, the monks from the Three Great Monastery of Tibet(Sera Monastery, Dreprung Monastery, Ganden Monastery)assembled before the statue of Shakyamuni reciting scriptures and praying for best wishes. The Prayer Festival became more and more ceremonious as time passed by. And every time the Dalai Lama was dying, the worship accumulated and the praying time lasted longer and longer. From the fiesta of DalaiV, the Great Prayer Festival was finally fixed to begin from the fourth day of the first Tibetan lunar month to the 24th(a day to pray to drive ghosts away)and 25th(a day to invite and welcome Amitabha Buddha) and it will be held on March, 8th, 2011. During the festival, lamas from the three largest monasteries gather in the Jokhang, reciting scriptures and attending an examination for the Gexi degree. Pilgrims come from every corner of Tibet and donations are offered to the monks.

The 15th day of the first month by the lunar year is the day when Buddha conquered or converted six holy men of false religions. On the day the Living Buddhas and monks from the Three Great Monastery of Tibet will hold a grand religious ceremonies, reciting scriptures and praying for best wishes, making the Great Prayer Festival reach the climaxes .By nightfall colorful butter-made sculptures of figures, flowers, birds, and animals are displayed on the flower beds. The tallest flowerbeds is 10 meters high while the lowest is 6 meters high. Among the sculptures some are towering , magnificent, and greatly surprising, some are beautifully wrought and charming, some are be high up in the air like birds to fly, some are repeatedly joint like a stereopaiting. All these with the flashing of thousands of butter lamps make the street dazzlingly brilliant showing the people’s love for peace. The citizens rush down the street to appreciate the lamp offerings, the farmers circle around the lamp offerings to dance and sing throughout the night.