Mt Kailash (Gang Rimpoche in Tibetan), is located in Burang County, and is 81.3°longitude east, 31°altitude north. It is the highest peak of Gangdise Mountain, with an altitude of 6,638 meters (2,177 feet). 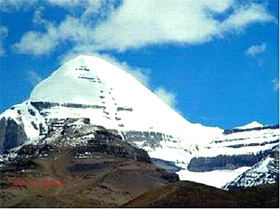 Mt Kailash (Gong Rimpoche) refers to the “sacred mountain” in Tibetan and “Heaven of Siva” in Sanskrit (Siva is the god of Hinduism). It is the place where the religion of Bon is originated. According to the Indian epics Lomoyana and the Tibetan historic epics History of Gangdise, people began to worship Mt Kailash as early as in 1000 B.C. As the Bon sutra goes, a river, which rose from Mt Kailash, flew into Lake Manasarova, which meant “unconquerable”. Then four great rivers, named after the four supernatural animals in paradise - the horse, lion, elephant and peacock, rose from the lake and flew to four directions.

It is said that Mount Kailashis the Sumeru Hill in Buddhism. Semeru means the center of the world. As the legend goes, 360 deities once lived on the mountain.

Indians call it Mt Kailash. They also think it is the center of the world. They believe that Siva, the god with highest supernatural power and the highest rank among the three gods of Hinduism, lives in the mountain. The upper branches of Hindu River, Ganges River rise from the mountain. So it is not strange to see a lot of Indian pilgrims there.

The weather is very changeable on the mountain. The temperature changes greatly during day and night. Tourist should know about the climate before going and prepare enough warm clothes.

The only possible transport to Mount Kailashfrom the south is to hitchhike a vehicle (Sometimes it is only possible to cover one part of the distance, and then you have to hitchhike another vehicle to continue with your trip). The transport from the north is mainly the trucks running to and from Shiquanhe Town. It is 330 km from Shiquanhe to the Sacred Mountain, and it takes 1 and half days to reach the mountain. The fee is about 50-80 RMB.

Any time is ok for the Circling. However, April 15 is the day when Buddha Sakyamuni was born, the day he became the Buddha, and also the day when he passed away and reached the state of nirvana. On that day, a ceremony of replacing the Mani flag is held at the entrance of the Sacred Mountain. The Tibetan Buddhists believe that the circumambulation this day will accumulate more virtues for them. So there are usually more people there that day.

Back to Ngari Tourist Sights