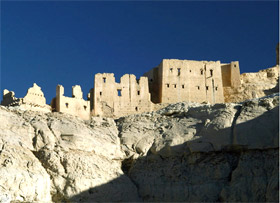 The Guge Kingdom was founded in about the 10th century by a descendant of King Glang Darma, who fled from Lhasa after the collapse of the Tupo Kingdom. The kingdom played an important role in the second renascence in Tibet and survived for about 700 years before disappearing mysteriously in the 17th century.

Large-scale of archeological work began in 1985. In the following years of the excavation, a lot of sculpture works and mural paintings were unearthed. Houses, cave dwellings, monasteries and stupas were found on the mountain where the ruins are situated.

Most of the sculptures are gold or silver Buddhist statues, among which the best one is a statue called Guge Silver Eye (Yinyan in Chinese). The murals are preserved in good condition, although they are hundreds of years old. The themes of the murals include every aspects of the social life of that time. A chapel on the summit of the mountain houses a mural depicting male and female Buddhas bringing the Tantric cultivation (civilization) together, while the lower part displays purgatory with naked, enchanting Dakins flanking each side. The artistic and aesthetic value of Guge murals is deemed comparable with that of Mogao Caves (located in Gansu Province, China).
Guge abounded with gold and silver. Sutras written with liquid gold or silver have been excavated in Tholing Monastery and in the villages of Zhabran, Piyang and Donggar. The sutra was written on a kind of dark blue paper, with the lines written alternately in liquid gold and liquid silver.

Guge Kingdom has attracted many explorers, tourists, photographers and artists from all over the world. Englishman Michael Young was the first person who investigated the ruins. In 1912, he traveled along Xiangquanhe River from India and reached the place. The real scientific investigation took place in 1985, when the Tibetan Cultural Committee organized a team to investigate the place. Their field work showed that there are a total of 1,416 surviving pieces of architecture, including 879 caves, 445 houses, 58 blockhouses, 28 pagodas, and four tunnels, which lead in all directions inside the architectural group.

The ruins of Guge Kingdom are located on a mountain in Zhabran Village, which is 18 km west of the county town of Zhada.

How to get there:

Guge Kingdom ruins are 18 km from the county town of Zhada. It is convenient to hire a vehicle to go there. Tourists who take buses should get off at Zhabran Village, which is south of the county town. They should walk for several kilometers before reaching the place.

It is possible to find hotels in the county town of Zhada. The restaurants mainly sell Sichuan food. Because the town is near to Shiquanhe River, fresh vegetables are available here, and they are not so expensive.

Wujing Guest House: The average price is RMB 25 yuan per person. The guesthouse may be out of power at night, but the hotel is clean.

Zhada Hotel: The lowest price is RMB 25 yuan per person.

Tourists can buy tickets for the ruins at the Culture Bureau. The price is RMB 90 yuan per person, but it is RMB 200-400 yuan for a foreign tourist.

Tourists should pay road toll when entering the Zhabran Village. Tourists should take flashlights along because it is very dark in the halls of the ruins.

Back to Top
Back to Ngari Attractions